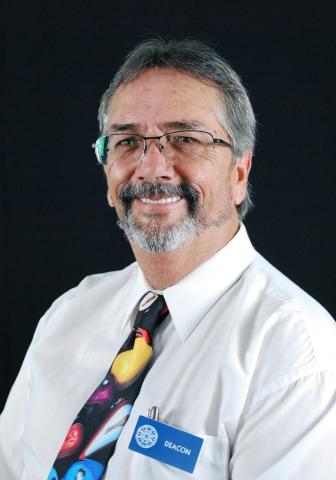 Bryan is serving as a deacon for the first time. He grew up in South Florida, and as he says, a “transplant from New Jersey.” He and his wife, Mary have been married for over 25 years, and they have 2 dogs and 4 cats. They moved to Chester in 2006 and became members of CPC in the fall of that year.

Bryan has worn a lot of different caps in the workforce from an assistant sales manager of a tire store, to an employee of Walt Disney World and a manager of Virginia T's. The one thing he has done for over 40 years has been a disc-jockey...from night clubs, owning a DJ business to working on radio. Bryan is a big sports fan of the University of Miami, Yankees, Miami Dolphins, (attending 2 games in the undefeated season!) and Nascar (Jeff Gordon and any Hendrick driver are his favorites).

Bryan looks forward to meeting and getting to know those in his shepherd group.